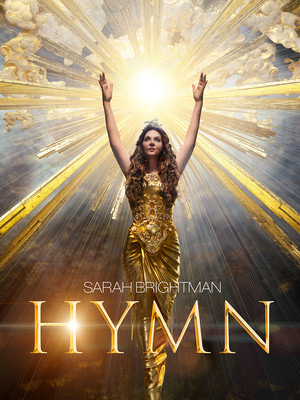 The only artist to have simultaneously topped the Billboard dance and classical music charts.

English singer-songwriter Sarah Brightman is setting out on a huge world tour in support of her newest album, "Hymn". Marking this her fifteenth full-length album, Brightman has gone spiritual in theme as the album features orchestrated and choir-based songs. Not only will this tour shine with her talent, but also because she's teamed up with Swarovski who'll make her dazzle in costumes and tiaras!

Her voice has soared out from theatres, arenas, cathedrals, world heritage centers and Olympic stadiums all over the world, making her one of the top-selling British artists of all time.

Her career began in the 1970s when, as part of Hot Gossip and as a solo artist, she released mainly disco records, before finding ongoing international fame with her most famous role to date, Christine Daae in Phantom of The Opera. Written for her by Andrew Lloyd Webber, her ethereal and enchanting voice became known worldwide.

About Greenvale Theater: We are an independent show guide not a venue or show. We sell primary, discount and resale tickets and prices may be above or below face value.

View all times and dates

Saw Sarah at the Dolby, LA. She was fabulous...the costume changes were... more

We travelled about 280 miles to see her show & it was well worth the money... more

Read all reviews Write a review

Sound good to you? Share this page on social media and let your friends know about Sarah Brightman at Tilles Center Concert Hall.